The 58-foot commercial fishing Ocean Challenger capsized Wednesday in the stormy Pacific Ocean, 90 miles south of Sand Point, Alaska. Four were on board the fishing boat. Moments before the boat capsized, the fishermen launched a life raft, but none of them were able to get in it, overtaken by waves two stories high. 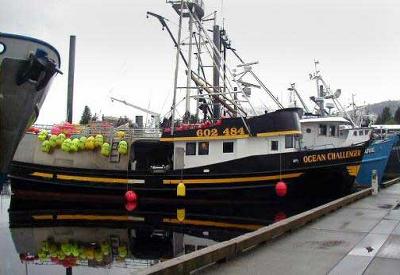 The first helicopter, a Jayhawk, arrived about an hour after the distress call. The Coast Guard sent a helicopter, a C-130 airplane and the Coast Guard cutter Munro to the location of the capsized Ocean Challenger. Ferrell was taken to the Cold Bay Clinic in Alaska, about 50 miles away, then to an Anchorage hospital.

The cause of the capsizing is unknown at this time.