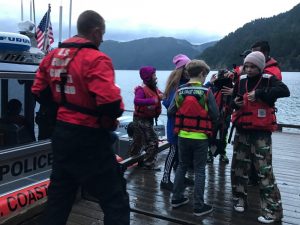 The maximum capacity of the Coast Guard vessel, a 29-foot Response Boat, was eight, therefore multiple trips were required to safely transport all students and chaperones from the northern shore to the Storm King Ranger Station on the southern shore. With a round trip of approximately 50 minutes, the rescue was not completed until 10:30 pm. Weather conditions were fair during the transportation process, with only minor wind.

All teens and adults were transported safely, with no injuries or medical emergencies reported.

“This case highlights the flexibility and professionalism of our rescue crews,” said Chief Petty Officer Philip Ketcheson, officer in charge at Coast Guard Station Port Angeles. “The crews ability to quickly respond to the request for assistance helped ensure the safety of everyone involved and helped them return home.”