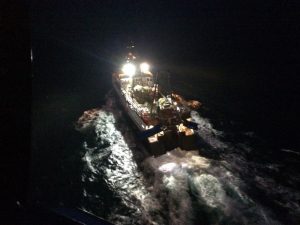 “This case demonstrates the importance of having helicopters deployed onboard cutters patrolling Alaskan waters,” said Chief Warrant Officer Joseph Ayd, command duty officer for the case. “Affecting timely response to medevacs and search and rescue is why we deploy a major cutter to the Bering Sea.”

At the time of the hoist, winds on the scene were reported at 25 miles per hour.