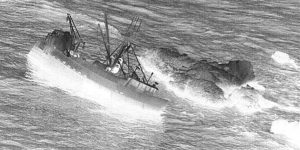 “We want to stress the importance of having proper survival gear on board in case of emergencies,” said Lt. Jacob Rettig, an Air Station Kodiak operations duty officer. “In this case, the crew had survival suits, flares, and strobe lights, which aided in locating and rescuing the crew safely and efficiently.”

There is concern that as much as 4,000 gallons of diesel fuel could be onboard the vessel, however there are no reports of pollution at this time. An investigation into the cause of the incident is pending.