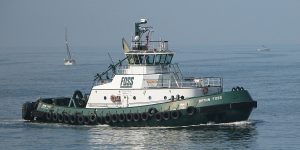 “The difficult decision is a result of Foss Maritime’s regular evaluation of business lines and follows the company’s diligent effort to improve the viability of the Seattle shipyard over many years,” the company said in a statement.

“While the closure of the Seattle shipyard is a strategic decision for the future of Foss, it is not a decision we have taken lightly,” said Will Roberts, President of Foss Maritime. “We have employees and families who have been with us for decades; our priority is assisting them in this transition.”

Foss operates one of the largest fleets of tugboats and barges on the West Coast. The company reported that other Pacific Northwest shipyards will be utilized to meet the needs of fleet maintenance and repair. The closure comes just 3 years after Foss closed the Rainier Shipyard in Oregon.

Foss Maritime Company is owned by Saltchuk Resources, a privately-owned family investment company formed in 1982 and based in the Pacific Northwest. The history of Foss Maritime Company can be traced back to the original owners, Thea and Andrew Foss, Norwegian immigrants who began a Tacoma rowboat operation in 1889.