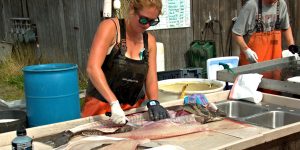 Fishers are also often paid a percentage of the boat’s overall catch, commonly referred to as a “crew share”. The more fish that are caught, the greater the crew share becomes. This can lead to unpredictable swings in pay from one season to another, as the overall catch can vary wildly. It is usual for more experienced crewmembers to receive a greater share compared to entry-level workers.In another report prepared by the Bureau of Labor Statistics, employment in the fishing and hunting industry is expected to grow about 11 percent between 2016 and 2026. This is in part due to greater demand for seafood. As Americans become more health conscious, wild seafood is seen as a reliable source of nutritious protein.

According to the Alaska Fishing Employment Center, salmon fishermen can earn up to $20,000 in three months, while crab fishermen can make up to $15,000 per month. In past years, deckhands on Bering Sea crab-fishing vessels have been known to earn up to $100,000 over a six-month snow crab season.

There is also an enormous difference in job types. Seafood processing and cannery jobs are quite different than fishing jobs. However, for people new to the fishing industry, these processing jobs are a great first step and a way for students, seasonal workers, or those wishing to break into the industry to get started. Many processors including North Star Fishing Co. have openings right now that involve 65 and 90 day contracts. Of note, these positions are for 16 hour days, 7 days per week in all weather conditions. Pay is listed as $4,750 to $6,600 per month, which includes room and board.

Before signing on, talk with prospective employers and people who have worked at sea for the companies you are interviewing with. Ask them to help you set realistic expectations. Ask about the work, the working conditions, and the expected pay. Read your contract carefully as it is crucial to fully understand what the job entails. Knowledge is power, whether you’re a greenhorn or a captain.