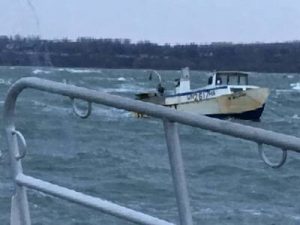 On December 31st at 3:05 p.m. the Coast Guard Sector Puget Sound received a distress call from a mariner aboard a 27-foot crab boat that was disabled and adrift in the shoals of Bellingham Bay. The mariner was safely removed from his vessel by the crew aboard a 45-foot Response Boat-Medium at 4:13 p.m. The mariner was listed in good health and did not require medical attention.

When the mariner called for help, he was disoriented and unable to give his exact location to Coast Guard personnel. Thankfully, his location was established using the GPS signal from his cell phone.

“The Coast Guard encourages mariners to carry a VHF-FM radio aboard their vessels,” said Don Knesebeck, a command duty officer at Coast Guard 13th District Command Center. “Even if cell phones have a GPS transmitter, tracking down a cell phone is an involved process. Calling 911 with a cell phone should not be ruled out in case of an emergency but using a radio for distress calls is the best possible way to get the help you need, faster.”

At the time of the rescue, weather was 25-knot winds with 4-6 foot waves.