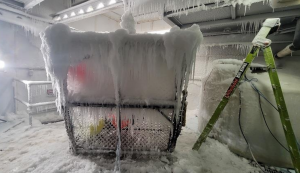 Research teams worked at sea with the crew of the F/V POLAR STAR as well as a testing facility at U. S. Army’s Cold Regions Research and Engineering Lab, within a chamber kept below 0 degrees Fahrenheit to reproduce the conditions found at sea. An oscillating spray wand and different configurations of pots, mesh, and floats were used to measure and track ice thickness and weight in varying situations and configurations.

The report states that “In different trials, the weight of the ice accreted in the pots equaled or exceeded a pot’s original weight. In multiple-pot configurations, the top of the stack generally accreted significantly more ice than the lower pots.”

In one trial, a 1,000 pound 8-foot by 8-foot by 3-foot pot was strapped to the deck of the F/V POLAR STAR. After 48-72 hours of spray time with a mist gun that simulated sea spray, ice accumulation on the pot and netting was so significant that the iced pot maxed out the scale at 3000 pounds.

“It is our hope that these findings inform industry and policymakers to make decisions to prevent future casualties as a result of asymmetrical icing,” said Captain Greg Callaghan, Eleventh Coast Guard District Chief of Prevention, and FV Scandies Rose Marine Board of Investigation Chairman. “We are grateful for the team at RDC who worked tirelessly to support the Scandies Rose MBI, from our initial interaction to coordinate the experiment on the Polar Star, to the planning and execution of the Ice Accretion Study. Their efforts have provided significant insight critical to saving lives in this industry.”

The report goes on to recommend that the Marine Board of Investigation issue “an examination of regulatory stability requirements pertaining to deck loading of frame and mesh fishing pots when a vessel can expect icing conditions.”

The study concluded that the 130-foot F/V SCANDIES ROSE experienced a loss of stability, possibly due to asymmetrical icing. This in addition to unintentionally over stacked ice-laden pots was a factor to this tragic sinking. The Marine Board of Investigation also noted in the 2017 investigation of the F/V DESTINATION, that loss of stability and rapid capsizing was directly due to excessive icing.

We invite readers to review the entire Ice Accretion Study report at https://bit.ly/38pMTFc .