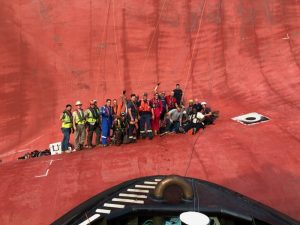 It was reported that 23 crewmembers and one pilot were aboard the vessel at the time of the accident. Authorities on the scene were able to rescue 20 people before being forced back by fire. The dangerous rescue meant airlifting 5 crew members to safety and another 15 by boat.

On Monday, contact was made with the four remaining crew members who were trapped inside. U.S. Coast Guard personnel were alerted to their location when they heard tapping from within the vessel. Rescue team members drilled a hole in the hull of the vessel near the propeller shaft, then passed food and water to the trapped men. Drilling continued, and the crewmembers were freed later in the day. The fourth person, who was trapped behind glass in the ship’s engineering compartment, was later successfully rescued.

U.S. Coast Guard Sector Charleston’s Capt. John Reed said the rescued crew members were in “relatively good” shape, despite being trapped for nearly 35 hours in the hot and smoky vessel.
An emergency safety zone has been established in St. Simons Sound. Non-authorized vessels are not allowed within .5 miles of the capsized ship.

The Marshall Islands-flagged vessel is operated by South Korean logistics company Hyundai Glovis. The vessel was carrying approximately 4000 automobiles bound for the Middle East when it capsized after leaving the port of Brunswick.

The U.S. Coast Guard reports that the focus is now on developing a plan for removal of the capsized vessel and environmental protection. It is not clear what caused the accident, and all options are being investigated. While Hurricane Dorian did pass the coast of Georgia last week, it remains unclear if the weather had anything to do with this incident.