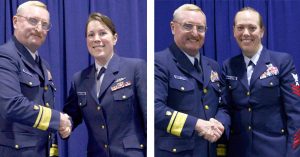 Individuals are selected by a panel of senior enlisted members who evaluate each nominee based on a set of criteria that includes performance, work ethics, military bearing, standards of conduct and a strong community service commitment. Regional winners are eligible for national honors along with their peers from other Coast Guard regions across the nation.