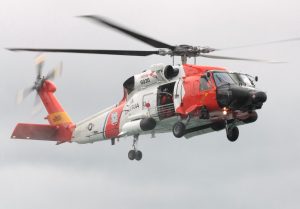 The US Coast Guard rescued three commercial fishermen on Sunday morning after their fishing vessel COASTAL REIGN began taking on water. The crew reported that their vessel struck a submerged object as they navigated the mouth of the Columbia River.

Watchstanders at Coast Guard Sector Columbia received the captain’s mayday call (listen here) at 3:20 a.m. An MH-60 Jayhawk helicopter was launched, and first to arrive on the scene at 3:38 a.m. A 47-foot motor life boat from Ilwaco, Washington arrived shortly thereafter, and assisted with the dewatering of the fishing vessel.

The dewatered vessel was then towed to safety and moored at 4:40 a.m.

A Captain of the Port order was placed on the COASTAL REIGN to ensure that damages are properly repaired and that the vessel passes inspection by a Coast Guard marine inspector before operating again.

There were 6-foot swells and winds of approximately 15 mph at the time of the rescue.