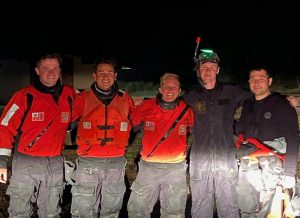 The 47-foot Motor Lifeboat arrived on the scene at about 1:20am but was unable to get close to the vessel due to shoaling.

The ground crew heroically ran more than 1.5 miles along the coast while carrying equipment and 500 feet of rescue line. At about 1:35am the fisherman was forced into the water. Petty Officer 1st Class Wallace Qual attempted to swim to the mariner’s position. The fisherman was swiftly swept south by the current, and Qual was forced to return to shore. Qual repositioned and went in for a second attempt and successfully rescued the fisherman. The crew on shore pulled the two from the surf via the rescue line, and the fisherman was transferred to awaiting emergency medical personnel.

“The overall teamwork that went into locating the mariner, and the communication between our crews, was huge”, said Qual. “When I got to him, he was wearing his survival suit and had an EPIRB (emergency position indicating radio beacon) and strobe light in hand. That preparedness probably saved his life.”

The U.S. Coast Guard praised the fisherman for being well equipped, for deploying the proper safety equipment, and urges all mariners to be well prepared for just this type of situation.

Weather at the scene was reported as 10-foot breaking surf, nearly zero visibility, 34.5-mph winds, and a water temperature of 56 degrees.