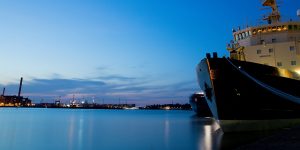 The Jones Act or Maritime Law requires that vessels moving goods between U.S. ports are owned and operated by U.S. citizens or permanent residents. Vessels are also required to be built in the U.S. by companies owned and operated by U.S citizens or permanent residents. The Jones Act requires that the steel used in the construction of a vessel be domestic, and that no more than 1.5 percent of the vessels “steel weight” be foreign processed. So, what happens when a vessel exceeds the limit? This is exactly what happened when Dakota Creek Industries, a 44-year-old family owned shipbuilding company in Anacortes, Washington, self-reported that the F/V AMERICA’S FINEST had indeed exceeded that limit.

The Kirkland, Washington based fishing company, Fisherman’s Finest, contracted a Norwegian company to design a new 264-foot trawler for the company. The vessel design required a steel-bending process that is more common and less expensive when fabricated in Europe. Just under 10 percent of the steel for the vessel was formed in the Netherlands. The vessel carries a $75 million price tag.

“Fishermen are key drivers of Washington state’s growing economy. We need their boats out fishing, not bogged down by regulations meant for large vessels like oil tankers,” said Cantwell.

Representative Rick Larsen and Senator Maria Cantwell helped push the waiver through Congress. “The Coast Guard worked hard to create a thorough report absolving Dakota Creek and giving the green light to the America’s Finest vessel,” Larsen said in the news release. “The employees at Dakota Creek support a job-creating industry that strengthens national defense and fosters innovation and contributes to the maritime economy in Washington state and Alaska. I am proud to be a part of giving the hard working employees at Dakota Creek a stronger future.”

The Senate voted 94-6 to pass the U.S. Coast Guard authorization bill, and the president has signed the bill. This ends a two-year battle and is good news for Dakota Creek, who had to lay off workers when payment for the vessel was withheld until the waiver was finalized. The waiver forgives Dakota Creek for using too much foreign-fabricated steel in the ship’s hull, an issue which made the vessel non-compliant with the 1920 Jones Act. Without a waiver from Congress, the vessel would not be able to work in U.S. waters. With the steel matter settled and a $53 million Navy contract, Dakota Creek is bringing workers back on the payroll.

However, for Fisherman’s Finest, the waiver does put limits on the number of fish they can process for the next six years and catch limits have been set on 53 different species. Alaska officials were concerned that this large vessel could have an adverse impact on competitive processors located in Dutch Harbor, which is the largest commercial fishing port in the nation.