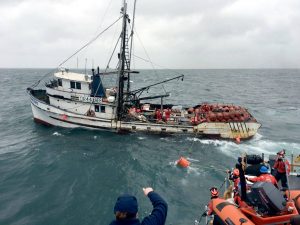 Five fishermen were rescued by the US Coast Guard after their vessel began taking on water west of Cape Alava, Washington.

Watchstanders were alerted to the situation on Wednesday, January 31st at 1:15 p.m. The 87-foot F/V Sunnfjord was taking on water, however, dewatering pumps were unable to keep up with the rising water. Good Samaritan vessels Island Voyager and Equinox responded to the distress call in addition to Coast Guard cutters Cuttyhunk and Swordfish. An MH-65 Dolphin helicopter from Coast Guard Air Station/Sector Field Office Port Angeles, a Motor Life Boat from Station Quillayute River, and a Motor Life Boat from Station Neah Bay were also part of the response team. Watch the video of this heroic rescue.

As the water rose in the engine room, fishermen donned survival suits and life jackets. The helicopter crew initially planned to pick up and deliverer another dewatering pump, but as the situation grew dire, they refueled at Neah Bay then traveled directly to the F/V Sunnfjord.

After Coast Guard cutter Cuttyhunk arrived at the scene, the captain requested that he be allowed to stay aboard and dewater the vessel. However, as water continued to rise, main engines were lost and neither of the two dewatering pumps passed to the Sunnfjord were operational. The fishermen abandoned ship and were transported by the crew from Coast Guard Station Quillayute River to Coast Guard Station Neah Bay aboard a 47-foot Motor Life Boat.

The Sunnfjord sank six miles offshore in approximately 300 feet of water. It is estimated 800 gallons of diesel fuel was aboard the vessel at the time of the sinking. The Cuttyhunk remained at the scene to monitor the situation.