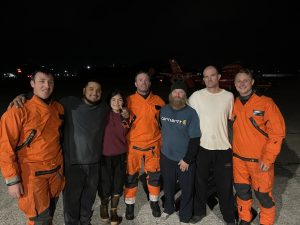 The four crewmembers were found by the helicopter crew huddled together on a rock near the grounded vessel. The crew was able to escape the impaired vessel via a skiff. Of note, all four were wearing life jackets, which most certainly contributed to the survival of these mariners. The four were hoisted from the rock about one mile west of Egg Island, then flown to awaiting EMS professionals in Dutch Harbor. No injuries were reported at the time of the hoist and transfer.

“This case showcased the tremendous teamwork of Bertholf’s entire crew to include our embarked helicopter detachment from Air Station Kodiak,” said Capt. Timothy Brown, Bertholf’s commanding officer. “Thankfully, these mariners were well-prepared for emergency, and took the proper actions in time to notify the Coast Guard and get off the vessel. We were very fortunate to be close by and able to arrive on scene quickly.”

Conditions at the scene were reported as 1-foot seas, 8-mph winds, 10-mile visibility, and a water temperature of 50 degrees. The vessel is being monitored and an investigation has been launched to find the cause of the grounding.