It is with great sadness that we report that the search for a missing fisherman near Nashagak Bay has been suspended.
On M 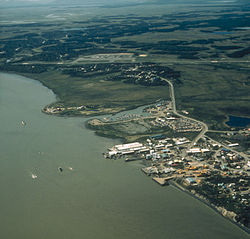 onday, July 1st at about 3 a.m. watchstanders in the Sector Anchorage command center received a call via VHF-FM marine radio that a crewmember aboard the F/V PAIL RIDER had fallen overboard in Nashagak Bay.

The U.S. Coast guard dispatched a C-130 Hercules aircraft crew and MH-60 Jayhawk helicopter crew from Air Station Kodiak to search for the missing crew member. Flares were also fired by the F/V PAIL RIDER crew to alert other vessels in the area. Searchers were optimistic that because the fisherman was wearing bright orange pants and bib that he would be spotted by one of the approximately 10 good Samaritan vessels that were near the scene and searching. The missing crew member was not wearing a life jacket when he fell overboard. The F/V PAIL RIDER is home-ported in Dillingham, Alaska. Originally, the U.S. Coast Guard was optimistic that the man would be found.

“We are hopeful that with the bright-colored clothing, we have a stronger chance of locating this person,” said Ray Dwyer, Coast Guard 17th District command duty officer for the case. “Going overboard without a life jacket greatly reduces the likelihood of survival, especially in cold water. But with the help of all the good Samaritan crews out there, we’re doing everything we can.”

“Despite our very best effort today along with about 10 fishing boat crews who helped us search, we were not able to locate the man who went overboard this morning,” said Ray Dwyer, Coast Guard 17th District command duty officer for the case. “After an exhaustive effort, the difficult decision was made to suspend.”

Commercial fishermen and crewmembers are not required to wear life jackets or personal flotation devices, although federal regulations require commercial fishing vessels to carry a PFD for each crewmember. It is estimated that less than 10 percent of Alaska fishermen wear PFDs.

Commercial fishing carries a fatality rate that is currently about 23 times higher than that of all other occupations. Vessel sinkings account for half of all fishing related fatalities and falls overboard rank second. Death from falling overboard is largely preventable if the worker is wearing a life jacket or PFD.

According to a study called Fatal Falls Overboard in Commercial Fishing prepared by the National Institute for Occupational Safety and Health, between 2000 and 2016 there were 204 U.S. fishers reported missing after falling overboard. About 90 percent of the victims who fell overboard were never found, and of those, none were wearing life jackets or PFDs.

Modern life jackets are not as bulky and cumbersome as those from previous generations. Newer models are lightweight and often built right into rain gear or fit comfortably over deck gear. Vessel owners must recognize the duty of care that they owe to their workers. We urge all fishermen and crewmembers to wear a life jacket or PFD. You owe it to yourself, your coworkers, friends, and family.