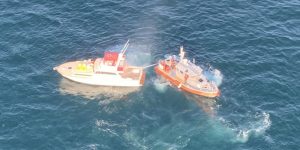 One of the mariners was examined by medical personnel for smoke inhalation, but no other injuries were reported.