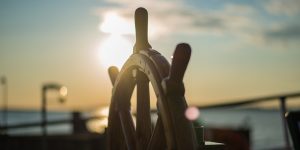 The U.S. Coast Guard Sector Columbia River is clamping down on “paper captains” in the waters of Washington and Oregon thanks to Lt. Cmdr. Colin Fogarty, enforcement chief for the sector in Warrenton, Oregon. As an educated and licensed attorney, Fogarty, and his colleagues are highly skilled at proving Jones Act violations and enforcing the law.

Under the Jones Act section 12131 of title 46 of the United States Code, U.S. flagged vessels are required to be under the command of a U.S. citizen. In an effort to save money, some vessel owners hire foreign nationals to command U.S. flagged commercial fishing vessels, offering lower pay. A U.S. citizen, often a subordinate or a deckhand, is listed on paper as the captain. These “paper captains” are not qualified or properly trained to command a vessel. Not only are they breaking the law, but they are putting crewmembers at risk. Lack of proper training and human error cause a majority of maritime accidents.

Detecting and proving these violations can be difficult. In the past, operators have provided forged documents to authorities and turned off Automatic Identification Systems (AIS) to conceal the “paper captain” scheme. The sector has been successful at identifying law breakers by developing a unique fact gathering process and offering special training to U.S. Coast Guard officers who are involved in fact finding and gathering of evidence. It has also been found that repeat violations are common. In one instance an 89-foot vessel near Westport, Washington was issued a $3,000 penalty. That amount was raised to more than $12,000 after it was determined that the operator had previous “paper captain” violations.

In the past three years, more than 10 “paper captain” violators have been detected, resulting in penalties of over $63,000.  More “paper captains” have been found in Westport than any other U.S. port.

If you or a loved one has been injured on a vessel sailing under a “paper captain,” please contact the experienced lawyers at Stacey and Jacobsen, PLLC for a free consultation. The Stacey & Jacobsen, PLLC team understands how accidents happen and how they could have been prevented. They are dedicated to getting fair compensation for clients. Call (877) 332-5529 today for a free consultation.