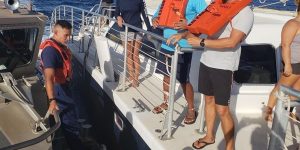 It is with great pleasure that we announce SN Theodore Noah S. Kirkbride of USCG Station Maui has been named the 2020 Enlisted Person of the Year.

Kirkbride, currently assigned to U.S. Coast Guard Station Maui, is originally from San Diego, California, where he graduated from Mount Carmel High School. After completing U.S. Coast Guard bootcamp in 2018, he was stationed in Maui, where he received training and developed his passion for emergency response work.

“I joined the Coast Guard seeking adventure, however, since reporting to my first unit, my whole purpose behind joining has changed dramatically,” said Kirkbride. “I realized how much we are able to do for the community; I may have joined for adventure, but I’m staying because I feel like I can help build better communities.”

Through his own initiative and leadership, Kirkbride has earned higher ranking qualifications, such as coxswain (the person charged with navigation and steering small and medium response boats). He also took his EMT training to the next level to maintain and inventory his unit’s medical response kits.

Kirkbride has served in more than 15 search and rescue missions which saved over 22 lives. He has administered life-saving oxygen therapy to a snorkeler in distress and assisted in towing a disabled vessel and six mariners over 25 miles to safety.

Kirkbride showed initiative and leadership during a particularly high transfer season  when he created a training program for coxswains and boat crew members that created an active readiness plan at Station Maui.

“Currently I’m in Boatswain Mate A-School; I will be returning to Station Maui and hopefully be able to grow in my abilities as a coxswain and learn how to train my shipmates to better perform our mission,” said Kirkbride. “While in the Coast Guard, I hope to establish more community outreach programs, especially working with at-risk youth in Maui County, I’m working with the Big Brother Big Sister Program to set up a ride-along program at my unit.”

He has devoted over 100 hours volunteering with the Big Brother Big Sister of Maui program. He enjoys surfing and skateboarding with his Little Brother, Aldrej. He is also involved with Our Kupuna, a non-profit that serves older adults in the Hawaii area. Through the agency, he has befriended Eddie, a home-bound member of the community. Kirkbride also volunteers with Critical Incident Stress Management, and has led peer-based counselling sessions with more than 300 participants, including the mayor of Maui.

“Kirkbride is an outstanding role model here at the unit, his leadership and commitment to others at Station Maui is inspirational,” said Senior Chief Malia Chasteen, officer in charge for Coast Guard Station Maui. “He is consistently and selflessly giving back to the members here at the unit and within the community in which we serve; he truly embodies esprit de corps and is most deserving of this recognition as the Coast Guard’s Enlisted Person of the Year.”