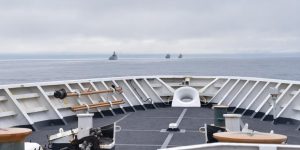 What is an EEZ? 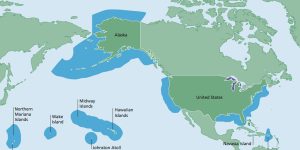 The U.S. Exclusive Economic Zone is an area that encompasses 3.4 million square nautical miles of ocean. Coastal States assume jurisdiction over the exploration and exploitation of marine resources in their adjacent sections of the continental shelf, defined by a 200 nautical mile area off the coast. Within this area, a state or a nation may claim and exercise sovereign rights and exclusive fishery management authority over all fish and all Continental Shelf fishery resources.

U.S. EEZ areas include coastal states as well as the Commonwealth of Puerto Rico, Guam, American Samoa, the U.S. Virgin Islands, the Commonwealth of the Northern Mariana Islands, and other territories or possessions over which the United States exercises sovereignty. Over 900,000 square nautical miles exist in Alaska alone, and more than 50% of our nation’s seafood is harvested from this EEZ area, with an annual value to the economy of more than $5 billion.

An Exclusive Economic Zone (EEZ) is a concept that was approved at the Third United Nations Conference on the Law of the Sea in 1982.