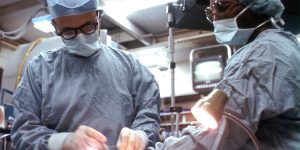 Watchstanders directed an MH-60 Jayhawk helicopter crew to launch from the Cold Bay Forward Operating Location as the vessel was located approximately 41 miles northeast of Cold Bay. A rescue swimmer was lowered to the boat, assessed the patient’s condition, then prepared him for a hoist to the helicopter in a rescue basket. He was taken to Cold Bay where he was reported to be in stable condition and delivered to awaiting medical personnel.

“Fishing vessel Arica was very organized,” said Lt. Cmdr. Jared Carbajal, aircraft commander for the case. “Arica’s shipboard medical professional had all the appropriate paperwork for the case and passed it to our rescue swimmer. We made a short trip back to Cold Bay and were able to pass off the patient with all medical documents to awaiting EMS. This efficiency allowed for the timely care this patient needed.”

Cold Bay is one of three Coast Guard FOLs in Alaska used seasonally to reduce response time for distressed mariners out at sea. Thankfully, the helicopter crew, based out of Air Station Kodiak, was on deployment to FOL Cold Bay and were able to respond quickly.

The first sign of appendicitis is often pain across the abdominal area. The following symptoms are also common:

Anybody who experiences progressively worsening pain in the abdomen should seek medical attention immediately. Crewmembers at sea who experience these symptoms must alert their captain or supervisor and request medical treatment immediately. Other conditions may have similar symptoms, however, it is imperative as well as the mariner’s right to seek a diagnosis from the qualified medical personnel of their choosing. Their life may depend on it.