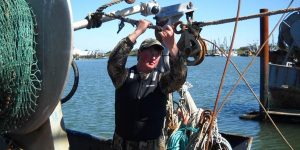 NIOSH Researchers began visiting Alaskan ports in October of 2008 in an effort to reduce overboard fall fatalities. The first part of the research project focused on a questionnaire developed and designed to understand and measure the fishermen’s perceived views regarding risk as it relates to overboard falls. The second part of the study evaluated 400 fishermen who agreed to regularly a PFD (4 different models were randomly assigned) for 30 days while working on deck, then they were asked to evaluate the products.

Wearing a PFD is the best way to make sure a commercial fisherman has as much time as possible to be rescued after a fall. These flotation devices provide a victim with the time it takes for a rescue, even in the coldest conditions.

It is commonly thought that overboard victims die of hypothermia, but the reality is that victims who are not wearing a PFD die from “cold incapacitation”, or the inability to coordinate the body movements necessary for swimming or keeping afloat.

If fishermen needed yet another reason to wear PFDs, researchers found that in about 53% of overboard fatalities, there were no witnesses (because victims were working alone on deck, or the fall went unnoticed by crewmembers). In addition to always wearing a PFD, fishermen should avoid working alone on deck, establish a MOB alarm system, and deploy a boarding ladder or trailing line to help seamen get back onboard.

The following 9 steps were prepared by NIOSH as well as this video titled Man Overboard: Prevention and Recovery.