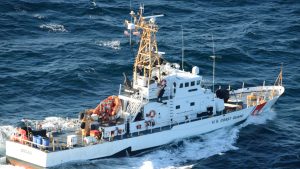 On Saturday morning, one of the U.S. Coast Guard search teams found an unresponsive female, who was identified as one of the F/V WHITE SWAN III crewmembers. She was pronounced deceased by local emergency personnel.

Rescue crews searched a 232 square mile area of sea for 24 hours but were unable to locate Mike Morgan. According to Chief Petty Officer William Colclough the search was suspended on Sunday.

“The decision to suspend an active search and rescue case is never easy, and it’s only made after careful consideration of myriad factors,” said Scott Giard, Coast Guard Search and Rescue program manager. “Our thoughts and condolences are with the families throughout this unimaginably challenging time.”

Mr. Morgan, age 68, operated the 32-foot vessel as a family business, and was well known throughout the community. He reportedly sold a great deal of his catch at the dock in Newport, directly to the public.