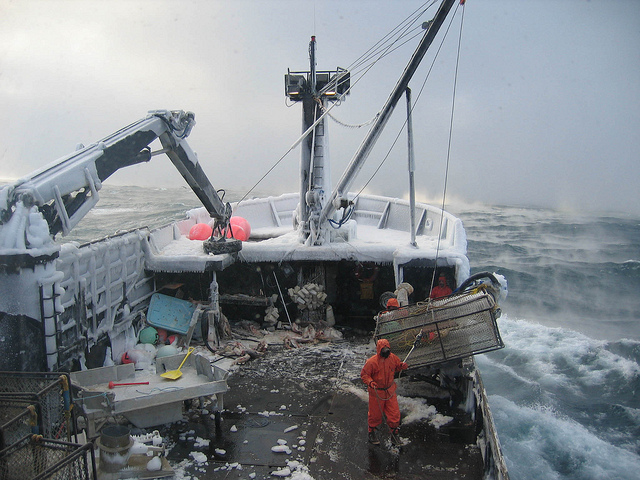 If a ship’s architecture does not change and the buoyancy remains static, how can these reports be out of date? According to Bud Bronson, a US Naval Academy graduate and Naval Architect, the problem with stability comes from this change in the center of gravity. “Weight is constantly being added to a vessel, a little at a time. Imagine a pump goes out on a vessel. The captain might purchase a new heavier pump as well as an extra, so he doesn’t have to go purchase another if and when the new one fails. The spare pump is stored on the vessel, adding weight to the vessel, which changes the center of gravity.”

This problem arises again when a boat owner purchases new crab pots. Many structural improvements have been made over the years to this equipment. Crab pots are bigger, stronger, and heavier than they were 10 years ago. The old ones might have weighed 500 pounds each, but the new stronger pots are larger and can weigh as much as 700 pounds.

Recent spot checks by the Coast Guard have increased since the sinking of the Destination on February 11, 2017. One of the pots recovered from the vessel that went down in the Bering Sea, was found to weigh more than the stability report recommended weight. According to Scott Wilwert, who coordinates the Coast Guard 17th District Fishing Vessel Safety Program, the spot checks are being driven by weight findings in the Destination case. “This is not something we had done with any real regularity in the past, and the testimony we heard from the Destination got us thinking that we should take a look,” said Wilwert. These Coast Guard spot checks have revealed that most vessel owners are underestimating the weight of newer steel-framed pots. Of the 40 vessels that the Coast Guard inspected in Dutch Harbor this fall, they found that most stability reports had been prepared years ago, and current crab pots were heavier by 30 to 90 pounds each, which could add up to thousands of pounds.

“When we looked at the stability books from the late ’90s and early 2000s, the assumed weights, and in some cases the size, of the pots were not what they are using today,” Wilwert said. With vessels using larger and heavier pots, most vessels inspected were carrying fewer pots, and the Coast Guard did not observe that any of the 40 vessels were overloaded.

When the Destination headed out for the snow crab harvest, it carried approximately 200 crab pots and 3000 pounds of bait. While this load was in line with the 1993 stability report, the report was based on older equipment, and crab pots that weighed about 100 pounds less than the newer crab pot that was recovered from the sunken vessel.

The Coast Guard published a safety alert in October  that advises vessel owners and crew to review their stability report and pay close attention to pot weights. “If the weights exceed the stability report, it’s important to update the document”, the Coast Guard stated. The safety alert also focuses on the dangers of freezing spray, which is a condition that the Destination likely encountered. As ice formed on the larger pots, the vessel most likely picked up even more weight.

Stacey and Jacobsen would advise all vessel owners and people who work at sea to read the new safety report.Update your stability report by making any necessary adjustments on your vessel, and stay safe.